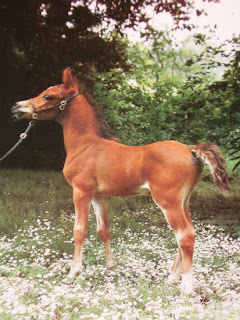 Isn't this sweet? Can I have one pretty pleeeeeease?

We looked at a cottage not far from our current home and the nearest neighbour is Combe Farm stud, who breed beautiful Arabs. Having owned one for nearly 10 years, which I had to sell before moving to Devon, I always feel a tad tearful when I see such beauty.

Arab horses run in my blood: my grandfather owned an Arab stallion which he rode during his duties in the Polish Cavalry in the 1930's - the only army who would tackle the german tanks on horseback! My mother has memories of being placed on the stallion's back at the age of 3 and being extremely frightened. I, however, seem to go the other way: if frightened by an animal I love them even more... Many a scar and bruise to show for this (fingers crossed no broken bones as yet).

I'm horseless at present, having promised Himself that I wouldn't get another until we have our own land... I did have my fingers crossed though, does that count?!
Posted by Cartervater at 3:18 pm