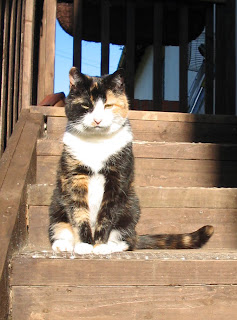 Last Tuesday, as mentioned in my last post, PC took her last little journey. She was very very tired and, although it was an incredibly tough call to make (always hopeful that she would rally through and improve) she wasn't able to stand on her own and we knew the time had arrived. We'd hoped her little body (which wasn't much heavier than a bag of sugar at the end) would make it's own decision and that she would go in her sleep, but this wasn't to be. I held her in my arms throughout and felt I had done my duty by this feisty little treasure of ours who has been with us for 12 years - we found her in a scrap yard and took her home, the vet at the time thought she was anything between 4 and 8 years old. So our little girl could well have been 20!

She wasn't an angel by any means, but that was part of her appeal :-) She ruled to house with a very loud voice - so much so that Carter, when he arrived nearly 6 years ago, was too afraid to even look at her (and she was the size of his head!) and it was about 18 months before he was brave enough to sniff her... Irreplaceable!

But somehow, even though it's so sad, we are relieved for little PC and can stop worrying about her now. Carter's missing her and has become very clingy - difficult to do when you're a clingy golden retriever anyway ;-) Having a 6 stone dog trying to get on your lap in the constricted space of the caravan is funny to witness!

News on the home front:: we should be moving towards the end of next week. I have some more photos which I will upload in the next few days - and it was fabulous to see the old farm buildings all demolished and lovely golden gravel laid in their place: a ray of sunshine!

Thank you all for your lovely comments, I never think about who is reading my ramblings, but I very much appreciate your thoughts.

TTFN.
Posted by Cartervater at 8:50 am

That's a wonderful obituary to an obviously well loved moggy.

Brought back memories of our old puss BB - I was asked to look after her by my mother (was given a tin of catfood) and we had her 17yrs+!