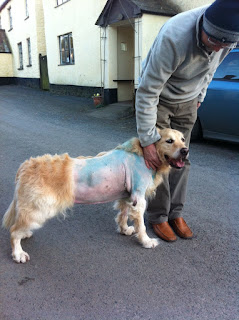 I have had so many, many messages of support and hugs that this very emotional time has been made less frightening knowing so many lovely peeps were thinking of us.

No doubt there are many folks who would say ‘its only a dog’ but there are many of us that feel very differently about the animals we chose to have around us. We have no kids and I have always presumed that ours are our child replacements. However, many people over the last week or two have said they feel the same and yet they have children too - so perhaps it’s just a human emotion some have and some don’t.

Anyway, as I wrote last week, Carter had a CT scan, where the surgeons inserted a catheter with a pressure sensor into his jugular vein in his neck and drew that down into the heart. This was to provide final evidence that what Carter was suffering from was pericarditis (an inflammation of the sac around the heart, the pericardium) rather than cancer, which wouldn’t give the same sort of pressure results I gather.

He went straight into surgery where the surgeons removed virtually all of the pericardium which would allow any fluid being built up to disspate within the body and be drawn away naturally into body cells. The type of pericarditis he had was constrictive, meaning the sac wasn’t expanding as it should, probably from previous scarring (he had something similar just over a year ago) - this can also be caused by cancer cells, which is why he had to undergo two days of tests before the decision was made to operate.

After the operation, which took about an hour, Carter went into intensive care where he was on an opium (well, opioid drug of some kind!) drip and had a chest drain to remove any air and fluid that built up after the op.

He came out of intensive care after a couple of days and the drain was finally removed on Saturday and he was given the all clear to come home yesterday (Monday) to carry on his recuperation with us. We were so excited, I was bouncing like a child!!

If I was excited, you should have seen Carter when the vet brought him out to us in the waiting room at Langley. He was chattering and shivering and so so happy to see us both :) I was a bit shocked by the extreme shaving - I’m sure as little as possible was done, but his entire torso is shaved apart from a 2 inch wide strip just off centre down his spine. And the colour! Blue rinse is one way of describing this… all from the chemicals they used in the op to keep him sterile. And he can’t have a bath, understandably, due to his many staples and stitches (both up the side of his chest and on his neck). But we don’t care what he looks like: it’s Carter. And now he’s home :))))

I didn’t know until yesterday, but after the op, he was unable to walk at all and had to be carried outside to have a wee. Carter has always had a tendency to slightly drag his back legs, nothing serious but it always just seemed his back legs were a little lazy! Turns out he has some kind of neurological issue that means he cannot use his hind legs very well, and in fact as he gets older this, along with the expected arthritis, has reduced his mobility only a little, but he hasn’t been able to jump into the car at all recently. He was also beginning to 'knuckle', turning his toes under and not realising he was standing on them (like a clenched knuckle) - this he hasn't done since he came home which makes the vet's comments that it may have been triggered by the build up of fluid on nerves a possibility.

Luckily, he can walk well again now without aid, he is a bit wobbly but that is to be expected. The vets have put him onto metacam, which is like ibuprofen (a non steroid pain killer) which we think is really helping his movement as he seems to have a spring in his step which wasn’t there before!

In all, about 10kg of fluid was removed from his chest and heart cavities (some immediately, and some has built up day by day whilst he was in Langley) and he now weighs a mere 35kg - the lightest he had been before was 38kg (and the heaviest 44kg, when a French vet very tactfully said ‘your dog eez fat’!), which considering he is a tall golden retriever wasn’t a problem. We’ve tried to keep him ever so slightly under weight over the past couple of years to help with his joints as he gets older - and we all know how goldies are led by their stomachs!!

So, there you have it, the full tale of woe and joy. I'm sitting here typing this with Carter fast asleep at my feet - a placce I hope he'll be for a long time to come :)

Fantastic news Ewa, so pleased to know that Carter is home safe with you both. Give him lots of hugs from us in the Lake District.
Poppy, Mocha and Coco send happy Labrador licks to their good friend Carter!

I came here looking for reasons as to why you're selling so much delicious yarn on Ravelry...what a story, I am so happy that you are reaching a happy ending now. I would have bought the Watery Felted Tweed like a flash had I seen it ~ Love Marianne

Great news, thank you for posting! I'm so glad that Carter is safe at home and recovering :-)
((Many hugs))

Hi Ewa... the previous comment was just testing whether I could leave a comment!
Anyway great news about Carter may he continue to thrive...
sending love
Cherrie and Reuben