First Foray Into The World of Dyeing 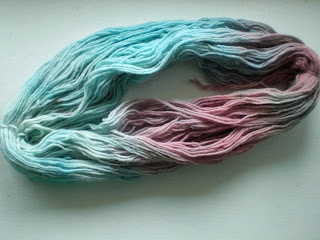 I purchased a starter kit from DT Crafts way back in December 2005, when I first had the urge to create my own personalised yarn. This, typically, got shelved and packed away - until now. Resurrected and used... however, things didn't turn out quite as initially planned!

My initial idea was to create skeins of duck egg blue with chocolate and some undyed bits, plus an alternative of pale pink and chocolate. Colourways which are much easier to find nowadays then they were even just 2.5 years ago - but that wouldn't stop me trying now.

I very carefully read the instructions, carefully measuring and noting all I had done (creating a stock solution of 1% of the turquoise and of the dark brown) and decided on using a turkey baster to add the dye to the presoaked yarn and then microwaving it.

First mistake: too much dye. No undyed bits remained.

Second mistake: was it me, or was it the long timespan since I purchased the dye, but the dark brown came out maroon! I decided to limit myself to two colours initially so the red wasn't used at all.

The yarn was rinsed until water ran clear, then hung to dry and re-skeined to mix the colours more evenly in the skein. I love it! Not what I had planned, but a great start nontheless with many points learned already - main one: leave the gorgeous colour dyeing to the professionals! Posh Yarn and Fybrespates cannot be beaten - but it's nice to try, even if it's just to know how time draining and complex the whole process can be. 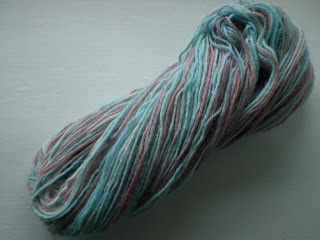 I'd love to try natural dyes, but step by step, let's get this one right first...
Posted by Cartervater at 12:24 pm

Nice yarn! Like you I've just started to dye my own yarns, although I've jumped straight in the deep end with natural dyes. It's actually not that complicated and great fun.

Thanks for the link to DT Craft & Design - I didn't know about these guys.

I hope you haven't given up blogging for good. I would love to know if you've done any more dyeing and how you're getting on in the gorgeous Devon countryside...

To encourage you back to blogging, I've tagged you - hope you don't mind. See my blog for more details. No obligation to participate of course.